Water and air. Ákos Rajnai takes these two basic elements as point of departure in his Contemplative video series. The two archetypes are symbols of life and that of soul. The videos are timeless, more precisely they are seeking the timeless wonder of existence in our trivial quotidian life. All this by using tools of (contemporary) art in our everydays, however using timeless archetypes, independently from any belief system. The video series is using a centuries long technique of uman soul, the contemplation.

The contemplation, the observation is the peek of practicing meditation. During contemplation one’s self driven by the interests of the practitioner retreats, thus observing the surrounding phenomena in itself and for itself without judgement.

Accordingly these works are not representations. They are not willing to depict the relation between the sublime and the ordinary, they rather “work” as an agent on their viewer. This means that the works draw us into the space in which they exist, instead of representing contemplative states of awerness, they summon them. They work as kind of contemporary mandalas, so they do not represent, but summon a state of mind through which the observer is able to regard the world from the viewpoint of so called “Big Awareness”.

Ákos Rajnai practices this absolutely simple, but possibly the most important “training”, the realization of our own soul’s beauty by using art’s both old and new tools. In the Lakeside video the surface of the water and reflection of the contrail emitted by an airplane presents itself as an abstract painting. At first glance we are not certain of what we see, is it the sky or its reflection? This in itself provokes thoughts, as the mirror and reflection is a recurring question, not only mystical, but also artistic: what is real? Is the image real? Is the reflection in the mirror real? Is it really me in the mirror?

The motive of water reappears in the work titled Restaurant. The camera records the wavy water and the mountains that surrounding it through the window of a lakeside restaurant. It eternalizes the immutability and stability, creating controvery with the wittingly humorous monologue that is heard in the background. The posing couple taking picture on the lakeside counterpoints the Manet-like immobility of the reflecting artist. The artist only pays attention, he absorbs everything without judgement and marvels upon the irony of humanity and the stableness of creation.

Video work titled Attic departs from a Rothko-like image. The glamming blue light might open a door to an unearthly world, which is at your fingerprints from the attic, however the noise of packing keeps us grounded in this world. The racing snowflakes, or the cloud of dust floats in the darkness like the schools of fish known from the oceans, then reappearing for yet another new dance.

The play of the wavy surface and the cavorting fish continues in the work titled Canal, again found as a close-up, abstract composition, not forgetting the buzzing sound of the highway and the cars. The rhythm of the water absorbs the natural flow of air, seeing the wavy water table in itself flips us from superficial viewing, however the artist reaches back again to the artistic tools, as the appearing white spots on the surface of the water can appear to be an artistic intervention. His works are therefore etudes to life, short exercies in order to recognize the being behind the surface. 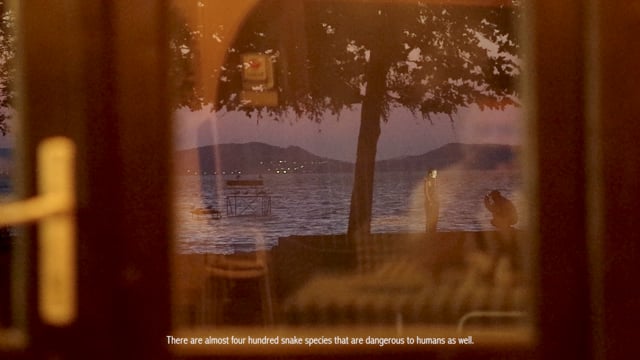 Link to the artwork

The works of Ákos Rajnai represent one of the possible endpoints of photography and visual imagery: they stand on the border between being photographs and images. Photographs, as they are made with a light-recording device and method: a very simple digital camera with minimal light sensitivity, the image of which was projected onto the canvas coated with a light-sensitive emulsion, and then recorded there - this is what we see. And images, as a drying rack and a low-pitched football gate are clearly recognizable on them: they are represented by visual means. Meanwhile, they are barely photographs: I would call them “minimally informative sets of data created with a digital device,” which are “stuck” in the haphazardly apllied emulsion and are only a small step away from being viewed as mechanical paintings. And barely images: although the main outlines of the originally mapped, frame-like objects appear as sets of condensed intersections, the ratio between information and visual noise, its eventuality creates uncertainty.

This is ephasized by the accidental nature of the “sight”: because of the technique used, the objects appear “negative”, that is, they appear almost illuminated with the saturation of light; in the visual noise all spatial relationships are lost and the two objects are seemingly floating. The two objects, which are hardly worth mentioning are two (practically) foound objects, redy mades, which in contrast to the duchamp pattern, lost all their objectivity. Perhaps this was the reason for their selection: barely objects, rather frames; they are structures in a sense that they give structure to the image.

Photo, but hardly; image, but hardly - mostly consideration and rarefaction of points. Ambient scenery, that one can explore from point to point, sometimes following an allotted path, sometimes without aid, unbacked; once in the dark, other times in light. The reduczion of these landscapes couneracts the usual image of our object-loaded world. It shows the endless openness of “almost nothing”. 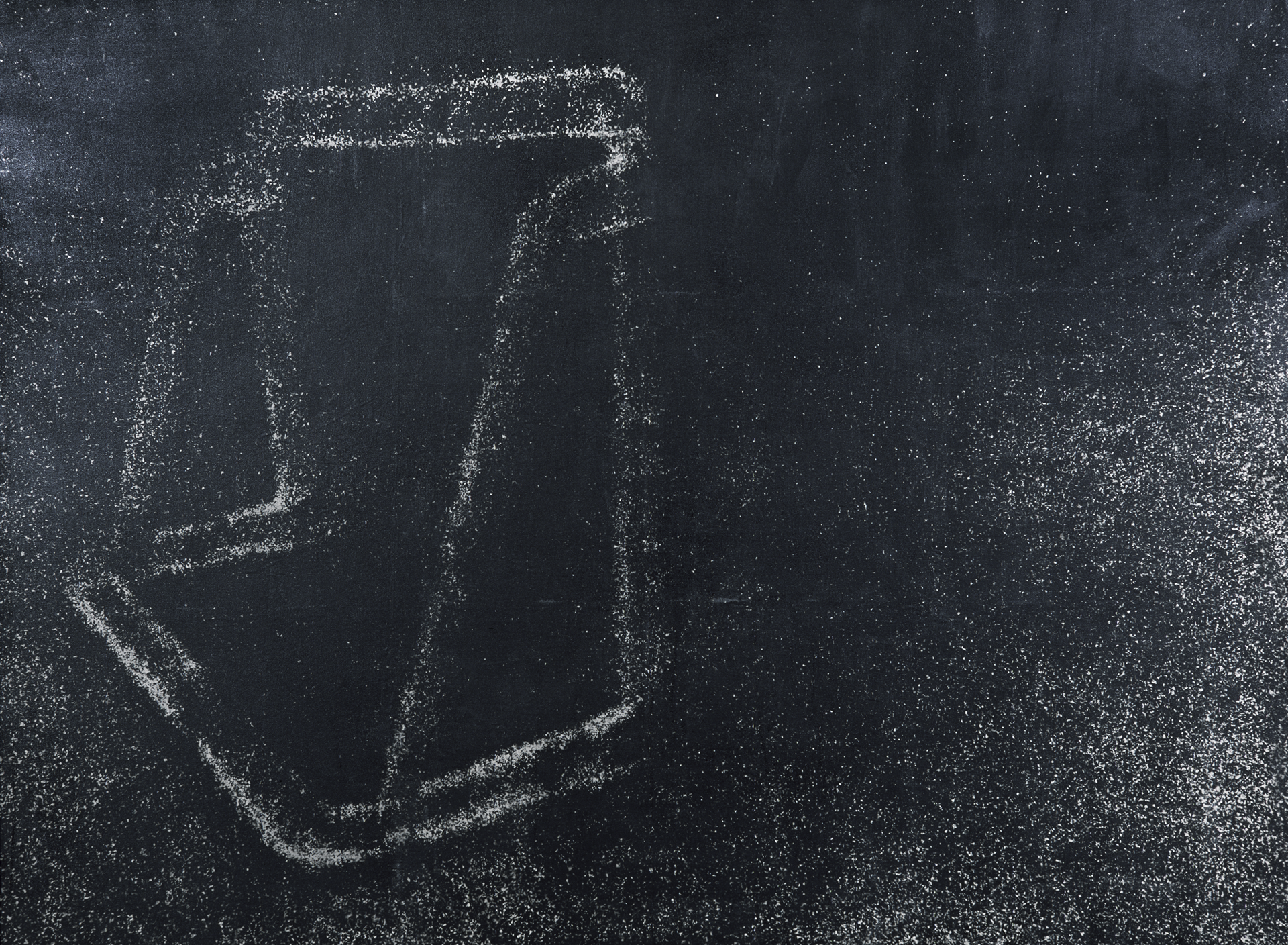 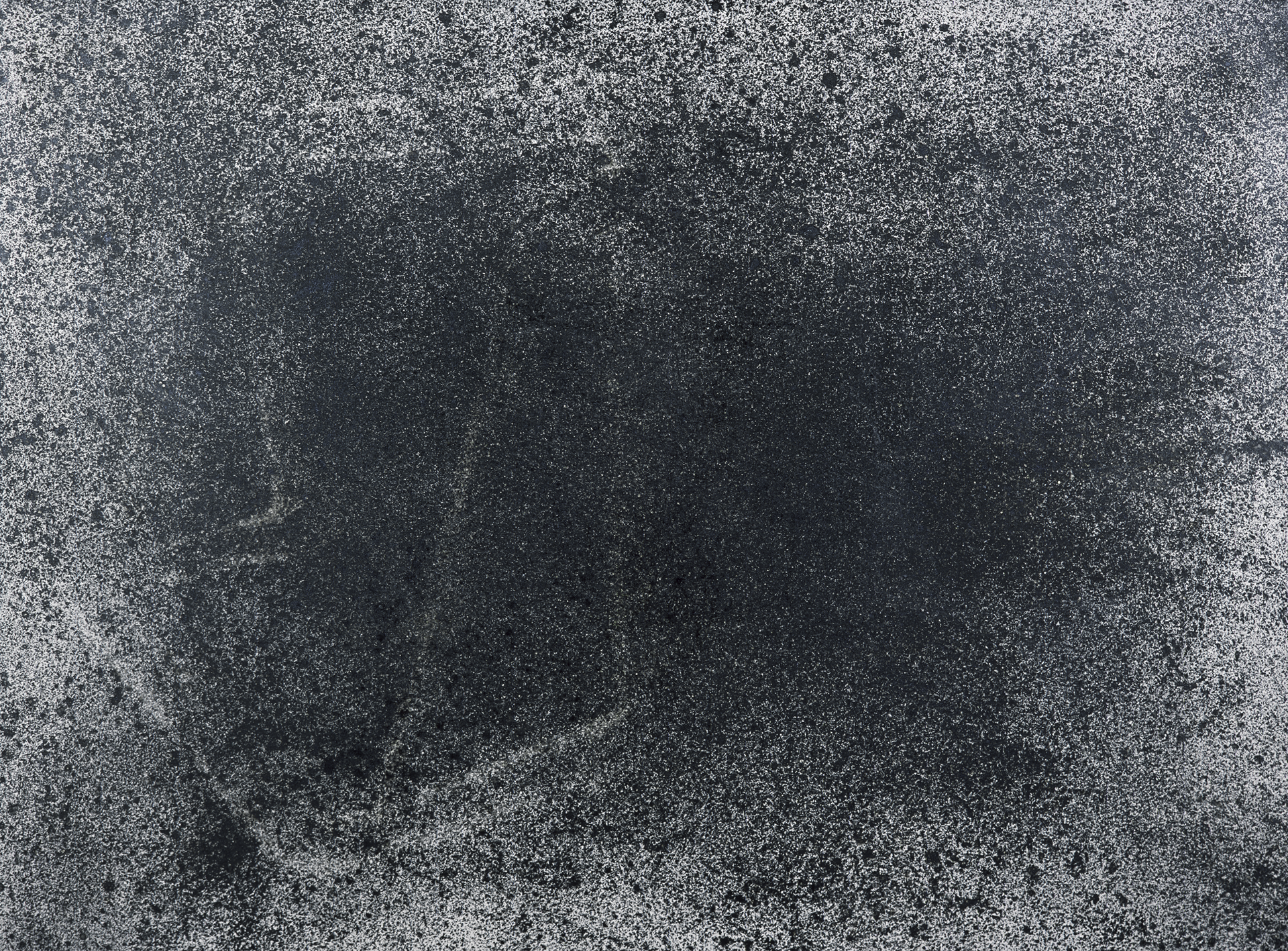 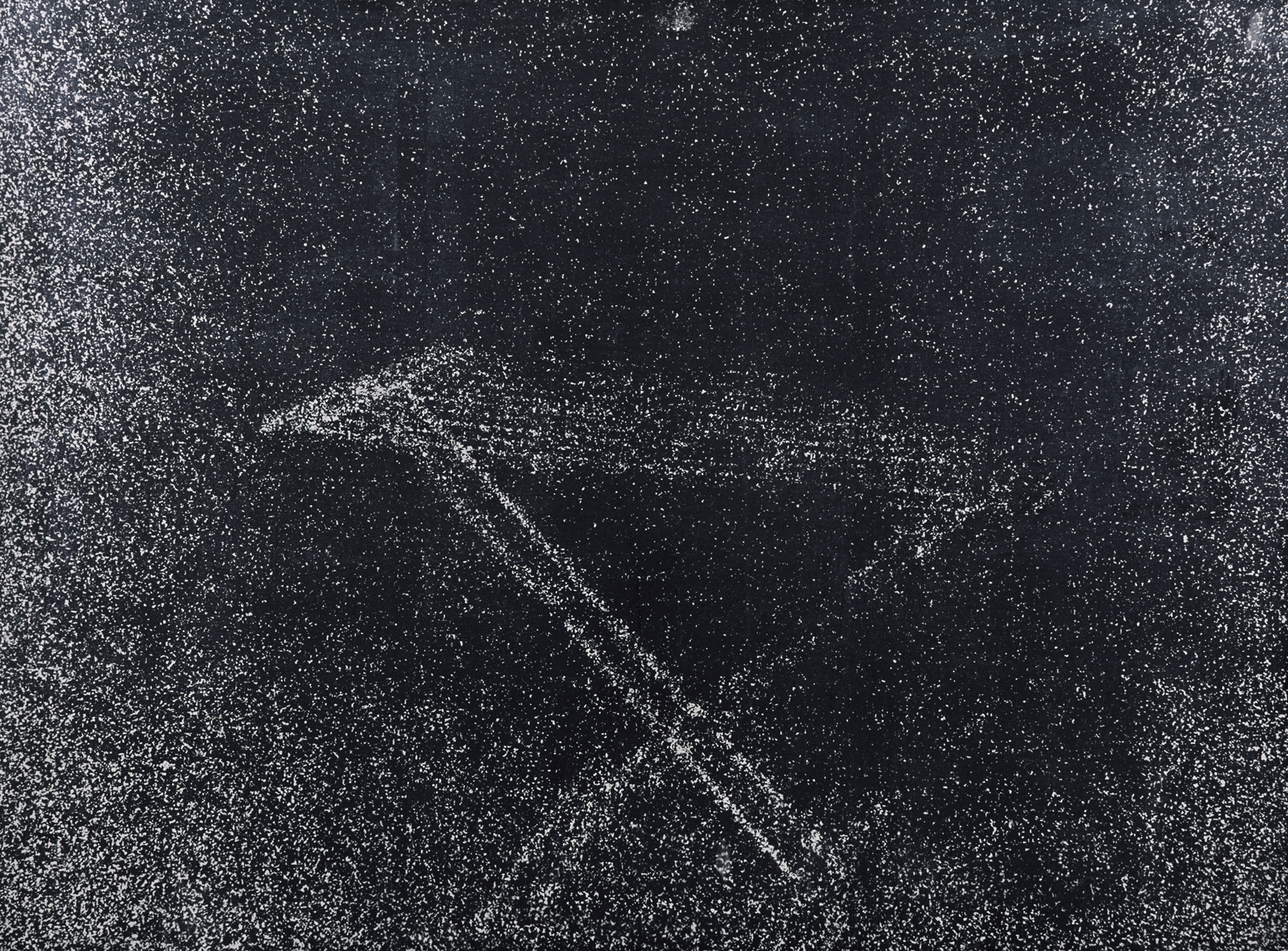 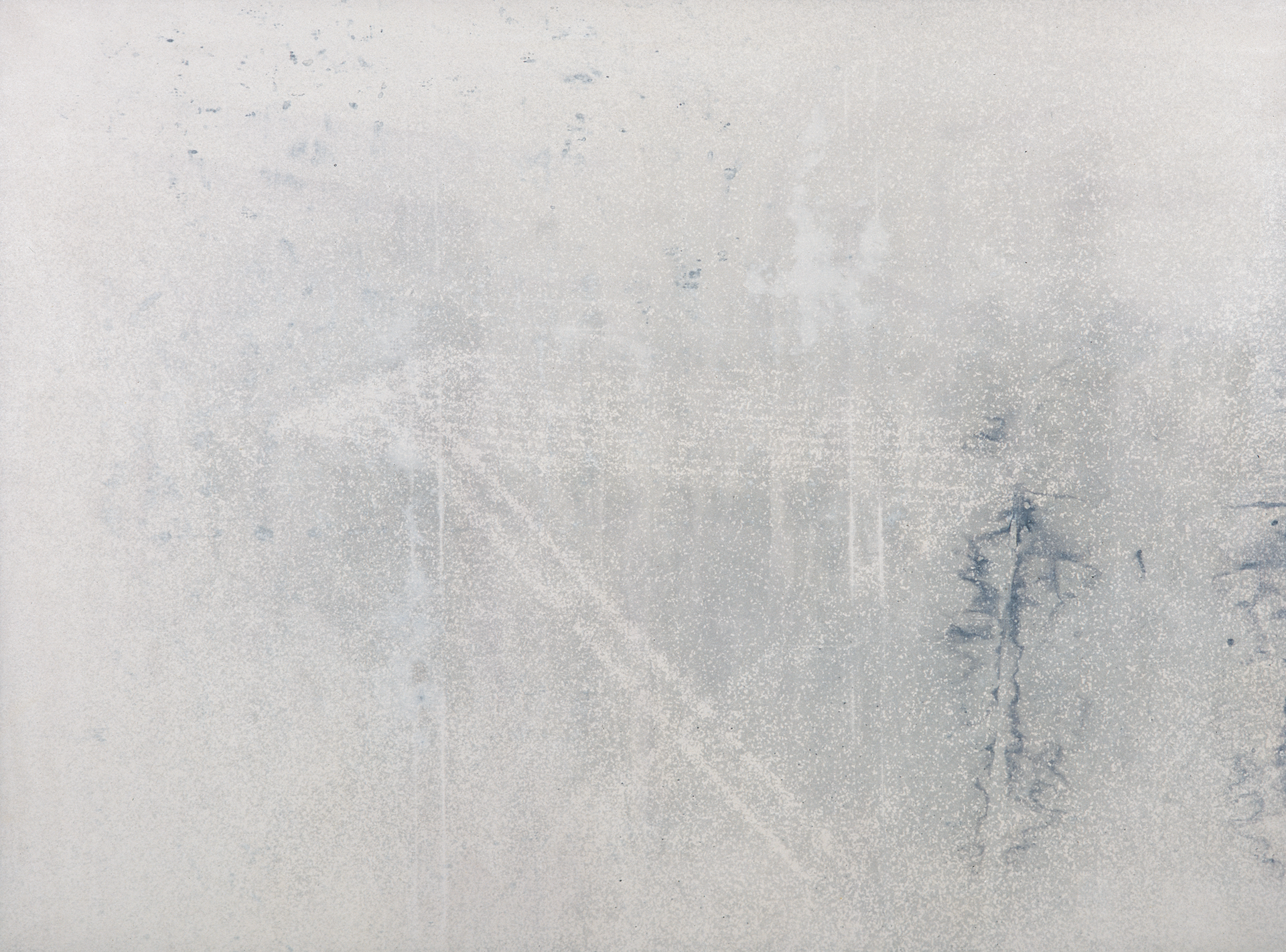 Link to the artwork

Black and white. The exhibited artworks of Tünde and Ákos inspire the art historian to speak with simple sentences and not to speak for too long. However, there is something that we need. While I was looking at their works and contemplating the appropriate tone of language for this opening, I remembered the Tractus Logico-Philosophicus by Ludwig Wittgenstein, which consists of such sentences: “The existence and non-existence of the chair is the reality.”

So the following speech is going to be a collection of associations based on such simple sentences. It is not going to form a coherent monologue that intends to get from one place to another. Such joureys, getting from A to B, departing someplace and arriving to another, are somehow illusions anyway, constructing development, innovation and other forms defined by reason. Let’s begin then, and hope that Wittgenstein will not turn in his grave.

The exhibition is titled Essenceless. This would basically mean that the work of many months - especially if carried out by artists who típically make a fetish of their own creations - is unimportant, which is rather uncommon. Why it it essenceless? What is essenceless?

According to the iterpretation by Tünde and Ákos, the form itself is essenceless, and therefore unimportant. The visible, the portrayed and the comprehensible itself is essenceless. Artworks beyond the world of form. Altough we could assume that is no greater commonplace I could say about an exhibition of abstract works. However, maybe what is displayed is these images is not very abstract, it very much concretely sepics what is beyond the form.

Ákos represents the photograph and the object that is photographed (let’s chew over this word: “photo” and “graph”), in this case the football goal or drying rack, in a manner that disassembled the image itself into pixels, and leaves nothing else but the visual noise to remain as the unit, that is a piece of the visible surface. Objects seen (or not seen) here are actually documents, photos taken in the dark using low-quality digital cameras about objects such asa football goal or a drying rack. So the particles and remains of the visual experience, that appear in our world. Therefore it is absolutely unimportant what the football goal or the drying rack are, since they are the same as any other visible information, a vibration or particle that is represented in our experience in different constellations, manifested as objects, persons, feelings, ideas.

While Ákos deconstructs, Tünde constructs and she breaks white through the black surface “fighting the material”, and attacks large canvases with black in a gesture-like manner. She creates black surfaces with abstract expressionist painting energies, which are actually black spaces with different depths, in some cases allowing the appearance of a little whiteness. The canvases call the viewer closer and closer, and we almost feel sorry that the images have an edge and do not cover the entire exhibition space, in order to allow our entry into this emptiness. The images do not depict or represent, they stand as tools on this route beyond forms.

The world beyond forms hides behind language. The very last sentence of Tractatus Logico-Philosophicus by Ludwig Witthenstein states: “Whereof one cannot speak, thereof one must be silent.”